No, tablets aren’t getting physically smaller! But the NUMBER of tablets being sold continues to fall. Analyst firm IDC reported yesterday that tablet sales for the first quarter of 2017 were down 8.5% compared to the same period in 2016, falling from 39.6 million units to 36.2 million. This marks the tenth consecutive quarter of negative annual growth.

This is very much in line with our 2017 prediction on tablets, which calls for a 10% unit decline for the year as a whole, to fewer than 165 million units, compared to over 180 million in 2016. See the chart above for the updated quarterly tracker, showing all quarters since the tablet form factor took off in 2010 with the launch of the Apple iPad.

Lots of reasons for the decline in sales. People keep tablets longer, and don’t upgrade as frequently as phones. Since 2010, our smartphones have gotten bigger (yay #phablets!) and our computers have become thinner and lighter. But a critical problem for the tablet market is the demographic donut hole in the middle.

Kids under 10 quite like tablets And those over 65 use them a lot. But people in the middle, especially millennials 18-35, are not the same. Asking them about tablets is like asking them about DVR players. They know what one looks like, know how to use it, and may even own one. But they almost never use it.

Not to spoil the surprise, but a study I have written that will be launched on June 21 in Paris looks at French Gen Y/millennials. Across over 55 types of behaviors, ranging from shopping and finance to travel and entertainment, tablets represented only 2% of all activity! Hard to get the kids to buy new tablets when they aren’t using the old ones much.

Another survey from Global Web Index shows that tablet ownership is actually beginning to fall. See chart below. 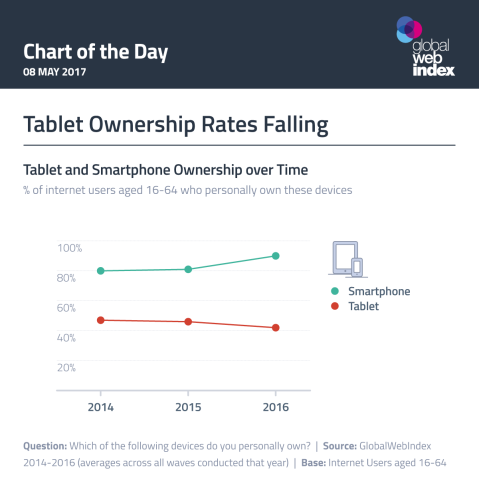 More updates on tablets as IDC publishes their numbers, of course.